Chelsea travels to Stadio Olimpico to take on Roma to conclude the second half of their doubleheader, having previously shared the points in a thrilling 3-3 draw at Stamford Bridge on October 18. Chelsea can seal qualification for the Champions League knockout stages with two games in hand if they beat Roma and other results go their way.

If Chelsea is going to improve on the result at the Stadio Olimpico, manager Antonio Conte will need star players such as winger Eden Hazard and striker Alvaro Morata to produce. Conte will also need his back three to contain prolific Roma centre-forward Edin Dzeko, who scored twice at the bridge.

Antonio Conte on N’golo Kante, who returned to training before the Bournemouth game, where he was not involved and has now travelled to the Italian capital. That was where Conte addressed the media and provided an update on the 26-year-old.

‘I was a player and I know very well after an injury, above all a muscular problem, a bad injury, it’s very important to listen to the player, to find out his sensation and then make the best decision for him and the team.

‘For sure tomorrow we try to make the best decision.’ 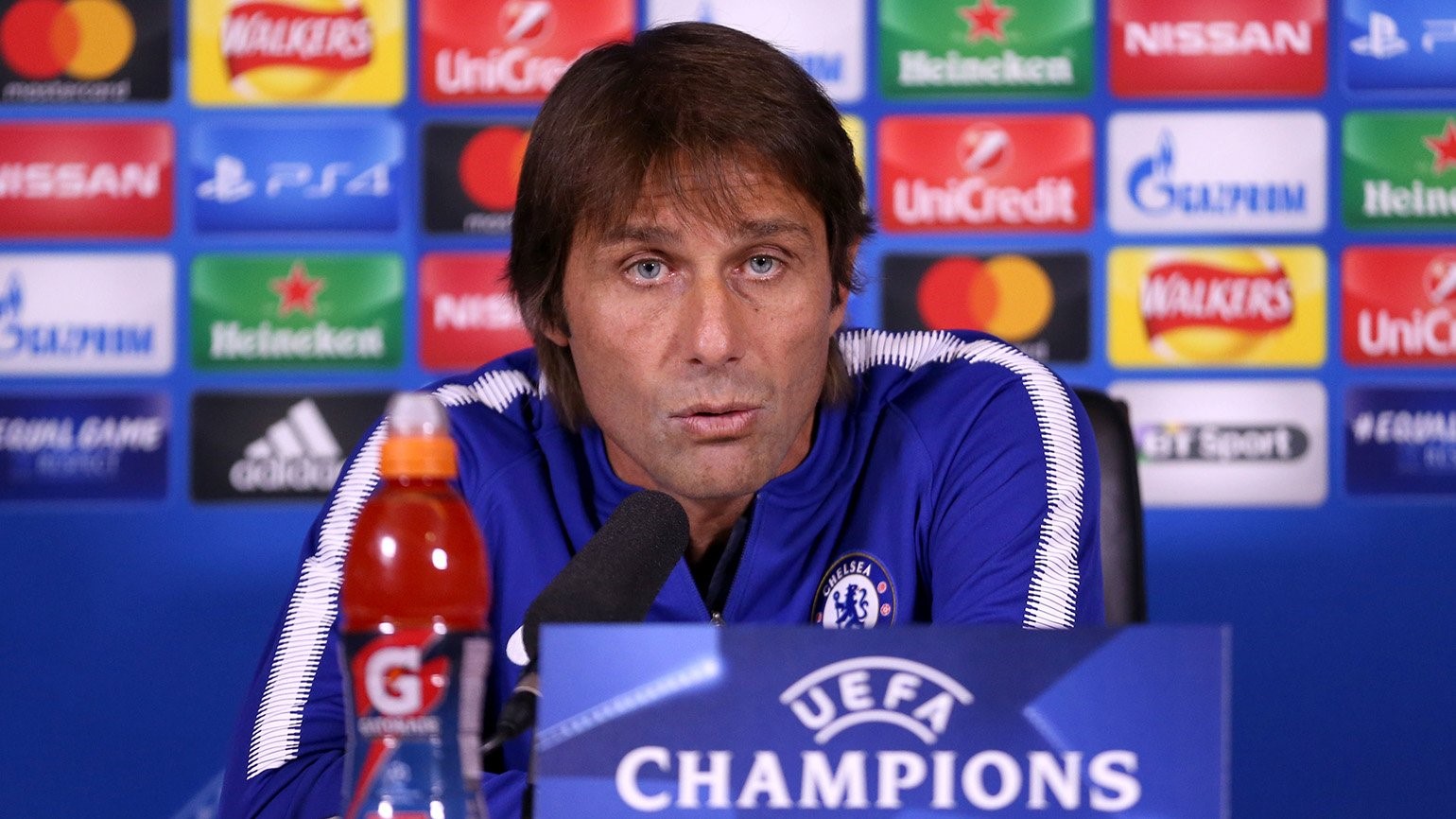 Conte later assessed the state of Group C as a whole, which we currently lead by two points ahead of tomorrow night’s fixture at the Stadio Olimpico, as well as his team’s current form.

‘Our group is a tough group with Atletico Madrid and Roma, two really group teams. To stay at the top of this group is really important.

‘We are trying to face all competitions this season. We went through to the next round of the Carabao Cup, we won the last two games in the Premier League.

‘Roma are in a good moment of form. It’s important for us to overcome this difficult period. We are recovering important players. You know how important it is for me to have all the players available.’

One of those available for selection is Alvaro Morata, who returns to the country where he excelled for Juventus as a multiple Serie A winner and a Champions League finalist. It was also in the stadium we play in tomorrow that he netted a Coppa Italia final winning goal against AC Milan in 2016, and Conte reiterated what his striker had said a little earlier tonight about life at Stamford Bridge.

‘Alvaro is a good person and he is enjoying his time in London and playing for Chelsea, a great team. I know very well where he is living with his wife, it was the same building I lived last season: a lovely place, it’s not so far from the training ground.

‘Every time I have spoken with him he has told me he is very happy for this fantastic experience for him, and for his wife. Personally last season I was alone without my family,’ Conte added. ‘When you stay abroad and work with a lot of pressure, it’s good to have your family with you. This season I solved this problem. My family stay with me, I am enjoying my time in Cobham, I am enjoying London and I am enjoying this league.

Head to Head – Chelsea vs Roma:

Chelsea and Roma have faced each other five times, in which Chelsea have managed to beat the Italians twice. The 3-3 draw at Stamford Bridge was the second draw between them. Roma has managed to beat Chelsea only once before in a 3-1 victory at Stadio Olimpico back in 2008 in a champions league game. 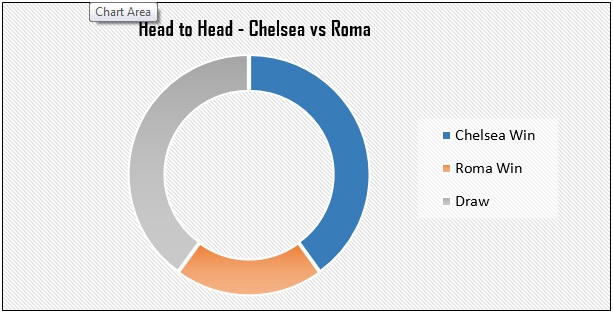 Conte will be hoping that N’Golo Kante is back in contention from a hamstring injury, though the Chelsea coach now has Danny Drinkwater back after a calf strain.

Victor Moses remains out of action with a hamstring problem suffered in the 2-1 defeat at Crystal Palace.

Solidifying midfield will be key for Chelsea, particularly to help cut off the supply lines to Dzeko. It would help to have N’Golo Kante back fit. But I expect Chelsea to start Cesc Fabregas and Bakayoko in the middle with supporting wingbacks Marcos Alonso and the former Torino man Davide Zappacosta. 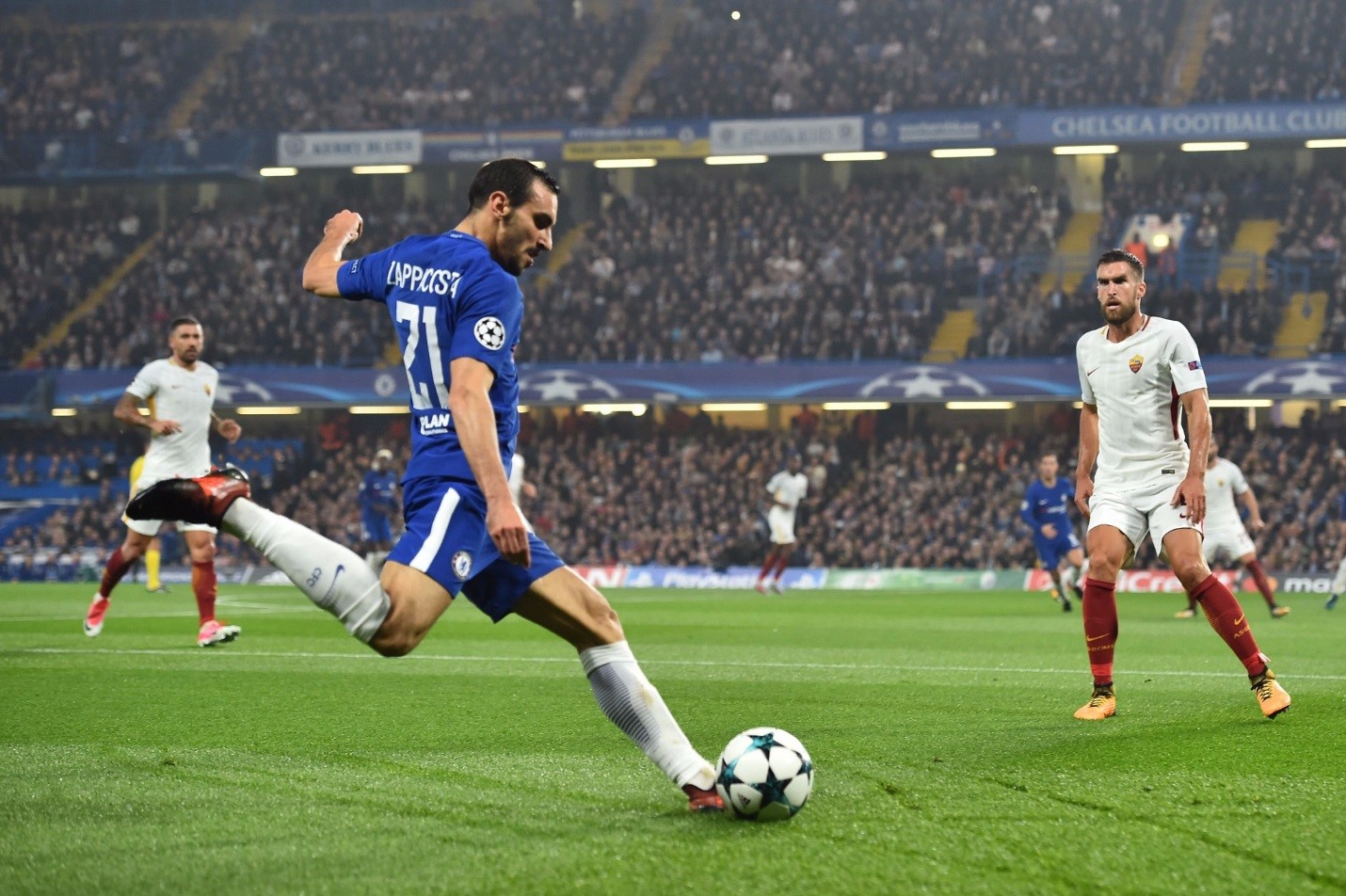 Antonio Conte’s back three will consist of Cahill, Luiz and Azpilicueta with Courtois in goal. Eden Hazard will partner Pedro in the attack playing behind the solo striker Alvaro Morata.

I would not be surprised if there are changes to this line-up with surprise start given to Drinkwater by dropping Pedro or by dropping Marcus Alonso and playing Rudiger as centre-back and Azpilicueta as a wingback. Antonio Conte can make these changes to coup up with the high pressure of Roma and also to avoid gaps along the left and right flanks.

Patrik Schick, Gregoire Defrel, Emerson Palmieri, Kevin Strootman and El Shaarawy are further doubts for the Italians, though the latter pair could be available for Roma manager Di Francesco.

I expect Roma to play a 4-3-3 formation with Alisson in goal with Bruno Peres, Juan Jesus, Fazio and Kolarov in defence.

Di Francesco would play De Rossi in the middle of the park with Strootman and Nainggolan in the flanks and bolster the attack with Perotti and Florenzi in the wings with the in-form man Dzeko upfront. 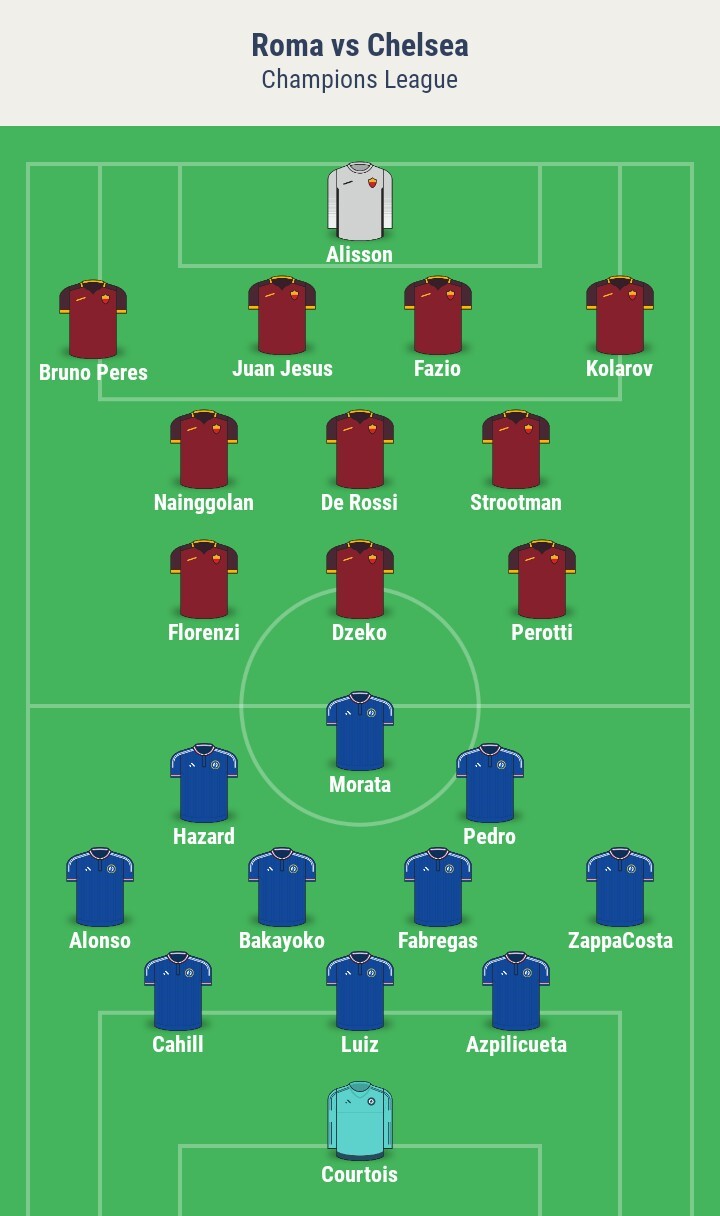 Players to watch out:

I think these are the key players for us who must perform if we are going for an improved result at Stadio Olimpico:

Eden Hazard: Roma’s key centre-back Kostas Manolas is expected to miss out, this would help the Belgian to run riot in the Roma defence if they tend to give him space again. If the linkup play between Fabregas, Hazard and Morata works well, then we’ll easily score. 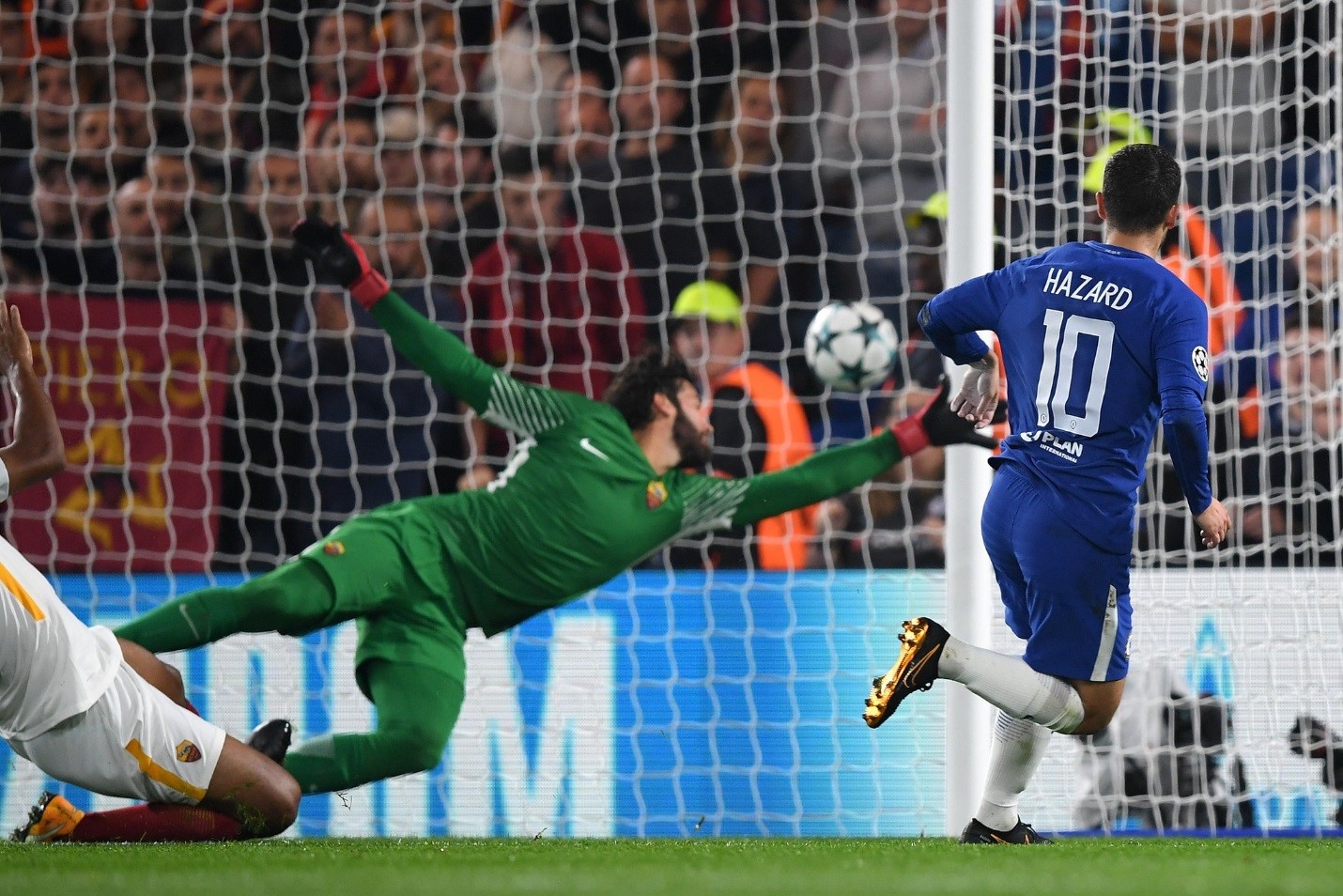 Bakayoko: In absence of N’golo Kante, I expect Bakayoko to step up and help Chelsea to cut off the supply to Dzeko and also avoid unnecessary fouls in key areas.

David Luiz: Dzeko easily thrived against Christensen, but facing a responsible David Luiz is, of course, a difficult task.

Key players in the opposition to watch out for:

Edin Dzeko: The inform striker is the player to watch out for in this game. The two goals which he scored at Stamford Bridge showed us how good he is now. 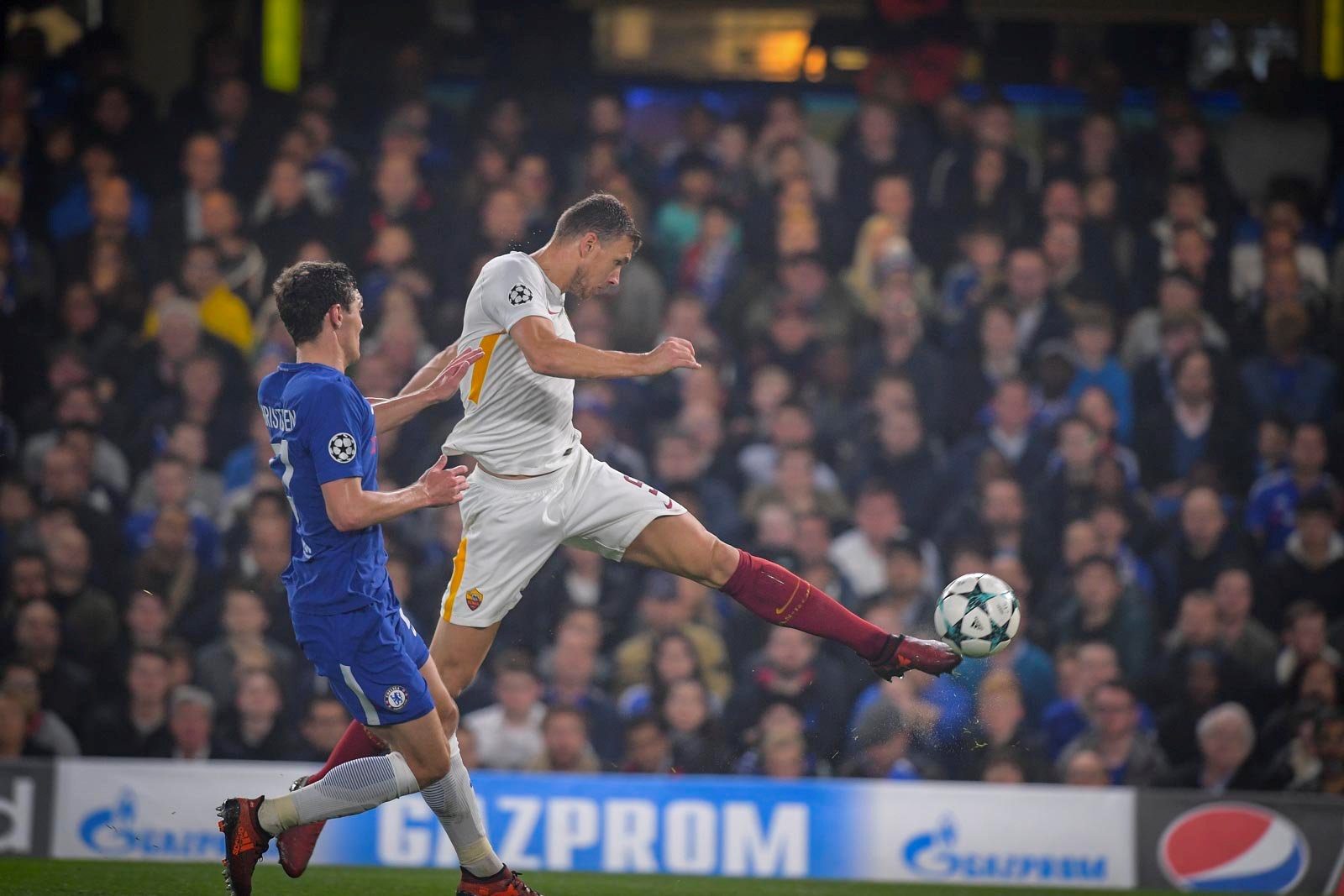 Perotti: This guy ran the show at our home, his cutbacks and running through the left flank showed how good he is.

Kolarov: The former Manchester City man has easily settled into the Roma side, Chelsea must be aware of his delivery and must not allow him to easily link up with Perotti and Strootman.

Chelsea currently tops the group with seven points from three games. With a win over Roma, Chelsea can qualify for the last 16 with two games to spare if Atletico Madrid fails to beat Qarabag in the Spanish capital on Halloween. Chelsea also faces Manchester United in the weekend at Stamford Bridge, so coming back home with a draw would be gold for Antonio’s men.

This is my first blog with Chelsea India. I hope everyone liked it. Please let me know your thoughts in the comments section below.