Chelsea host Manchester United on Sunday at Stamford Bridge. The ramifications of Sunday’s game at Stamford Bridge could potentially be far-reaching, with both sides in the hunt for Premier League glory. Defeat for Man United can deal a serious dent to their chances of catching Manchester City as it could see an eight-point gap open up between the teams in the lead-up to the busy winter period.

Chelsea, meanwhile, have already lost three games this season and a fourth defeat would be a hammer blow to the reigning champions’ hopes of defending their title. Indeed, a home defeat to the Red Devils so soon after their embarrassing Champions League capitulation against Roma would heap more pressure on Conte.

With the stakes so high for both sides, Sunday’s encounter is sure to have plenty of intensity and, with the narrative of former heroes such as Juan Mata, Nemanja Matic and Mourinho returning to Stamford Bridge, there will be no shortage of incident.

The Blues boss spoke to the media at Cobham and addressed a number of subjects, including the importance of showing character in tough moments and Sunday’s game itself. 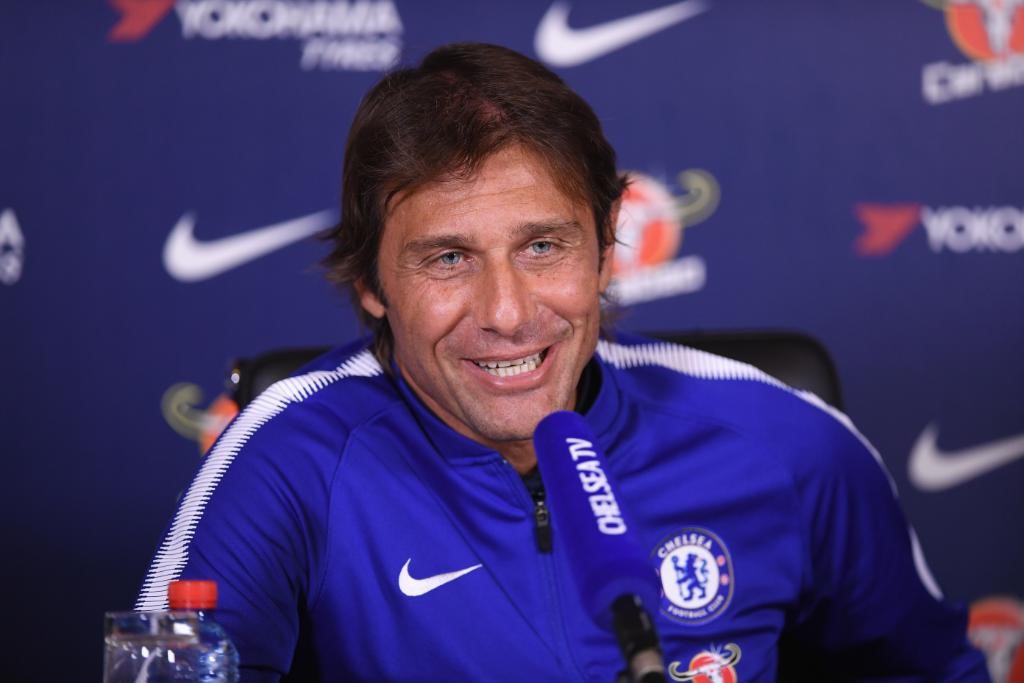 Firstly, he was asked if Kante, who hasn’t featured for the Blues since our game against Manchester City at the end of September, would be available for selection.

‘N’Golo is progressing well, we also have tomorrow and then I’ll take the best decision for him and the team,’ said Conte. ‘But for sure he’s progressing well and I’m very happy about this. We are talking about an important player.

‘If I wanted to risk him I could have done it against Bournemouth or Roma. Instead I waited, I had a lot of patience to find the best way and it means if I decide to put him in the team and start the game he will be ready.’

Conte, who said Gary Cahill will start on Sunday, also provided an update on the fitness of Victor Moses. 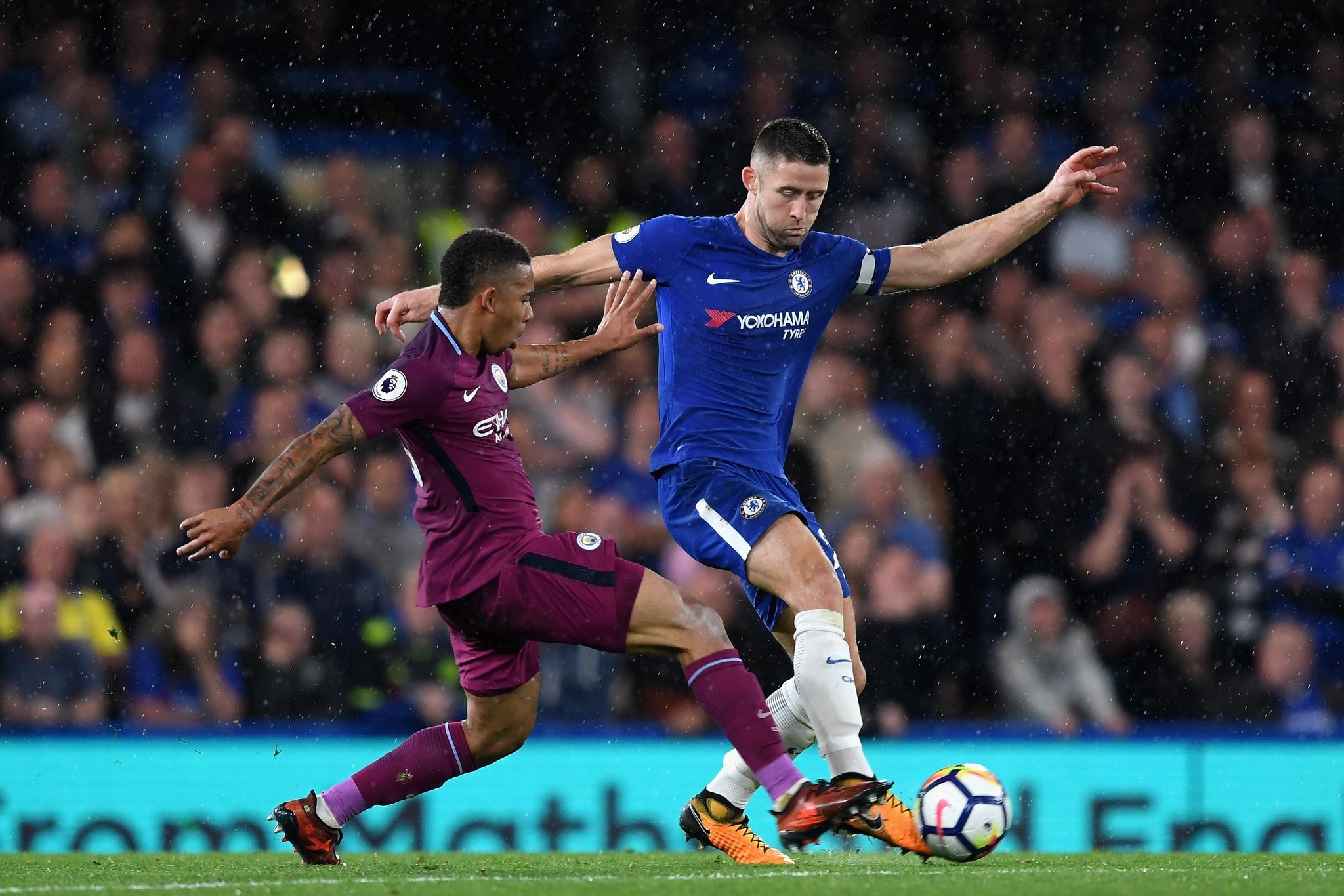 ‘No, zero chance,’ he responded, when asked if the wing-back could feature against United. ‘It was a bad muscular problem. We must wait and have patience, he needs more time to recover.’

Reflecting on the disappointment of the midweek defeat to Roma, Conte explained why we need to react in a positive way on Sunday.

‘Honestly, I think the second half against Roma was bad in many different aspects but sometimes it can happen,’ he said. ‘The most important thing is that you don’t see this type of situation again.

‘We played a really good first half and we were 2-0 down, but I was more worried in the match against them at Stamford Bridge when we were winning 2-1 because we didn’t have control of the game.

‘I was confident about the second half [on Tuesday] and it was very negative. But that’s the past and now we must prepare for the game against Man United and do our best on Sunday.

‘I’m happy to work with my players because their commitment is always good, but this season we are struggling because we are facing a lot of important problems, and to solve them is not simple.

‘But in this moment you can see if you are a winner or a loser, that’s very important. When the period is positive it’s very easy to play well and have confidence. When you are struggling it’s important to show character, be strong and face the problem in the right way. But in my life I’m used to doing this. I struggled a lot in my life as a player and then as a coach. My history shows this.’

Conte revealed he spoke to Roman Abramovich last Sunday at Cobham about the previous day’s win over Bournemouth, before explaining why he believes we will need to be at our best in order to overcome United on Sunday.

‘We are talking about a really good team, a strong team physically and it will be a very difficult game,’ he explained. ‘They are an important team and we must pay great attention. We are working to prepare for the game in the right way but United are a really good team.

‘When you play against United, Man City, Arsenal, Liverpool and Tottenham it’s always a big game. This type of game must excite the players, to play in a fantastic atmosphere and to know a lot of people will watch the game around the world.’

It’s been a positive week for two of our players currently out on loan in the Premier League as both Ruben Loftus-Cheek and Tammy Abraham were called up to the senior England squad for the first time ahead of their upcoming friendlies against Germany and Brazil.

Conte believes they are benefiting from regular involvement at first-team level.

‘I think these players are having the right path and development,’ he said. ‘It’s very important for them to play regularly and to show they are ready to be Chelsea players.

‘Don’t forget, the pressure is totally different if you play for a team in the relegation zone compared to a team fighting for something important, but I’m very happy they are doing well.’ 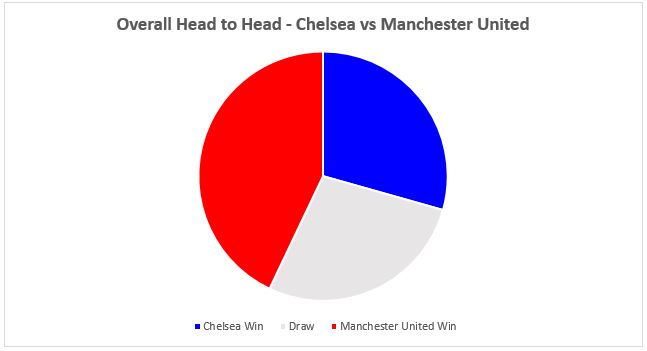 Chelsea and United have faced each other for 187 times overall, in which United have managed to win 76 of them while Chelsea have won 52 times and they have also shared points for the remaining 49 of them.

Chelsea have shipped 11 goals in their six matches without N’Golo Kante in central midfield and, after working his way back to fitness on the training ground, There are lingering doubts over the fitness of N’Golo Kante, Conte may well risk throwing the Frenchman back into the starting fold pairing him with Bakayoko in the middle and Zappacosta and Alonso providing cover as wingbacks. 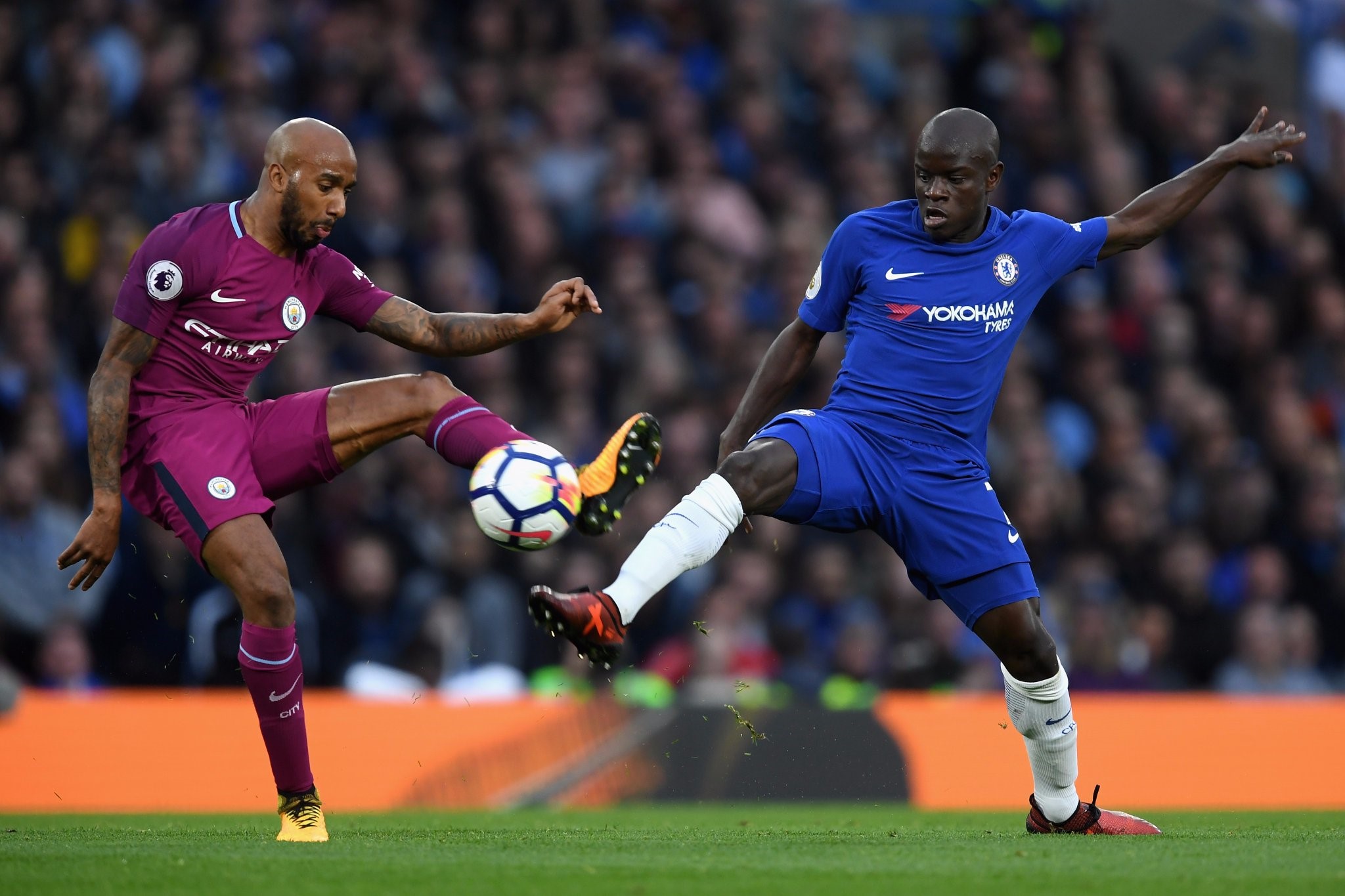 Danny Drinkwater is available for selection, but the former Manchester United youth player may have to make do with a place on the bench against his old club.

I expect the back three to be Azpilicueta, David Luiz and Cahill with Courtois in goal.

Marquee summer signing Alvaro Morata has struggled for form since picking up an injury before the last international break, scoring no goals and setting up just one in his last six matches, putting even more pressure on Eden Hazard - three goals and an assist in the same timeframe and Pedro.

In terms of the visitors, Mourinho is expected to recall Phil Jones and Antonio Valencia after giving them a breather in midweek, but further forward Jesse Lingard picked up a knock against Benfica and is a fitness doubt for this weekend.

Michael Carrick, Paul Pogba and Marouane Fellaini have all stepped up their respective recovery programs, meanwhile, though this trip to West London will come too soon for all three of the central midfielders.

Mourinho may therefore go with the same XI that saw off Spurs a week ago, meaning another start for Nemanja Matic, who has been used in every minute of every Premier League and Champions League game since arriving from Chelsea in the summer. 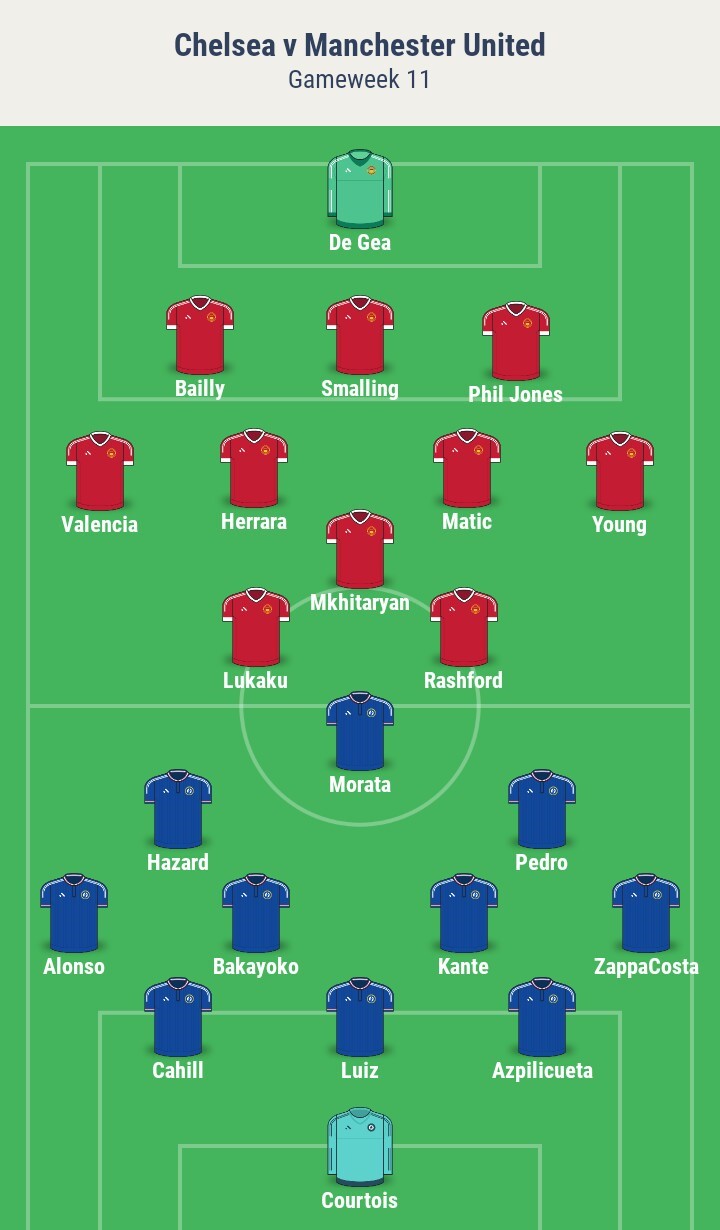 Players to watch out for:

I think these are the key players for us who must perform if we are going for win tomorrow at home:

1. Eden Hazard: Since Alvaro Morata is struggling for form after the injury, all the pressure is now on the Belgian now. We need a settler performance from him to win the game.

2. David Luiz: Definitely the man to watch out for. David Luiz is easily seen switched off and out of positions a lot this season. Doing them same against the likes of Rashford, Mkhitaryan and Martial will end up again in a thrashing.

3. Alvaro Morata: He has the perfect game to bring back his form and fire Chelsea back to the old stature. Expecting him to score tomorrow. 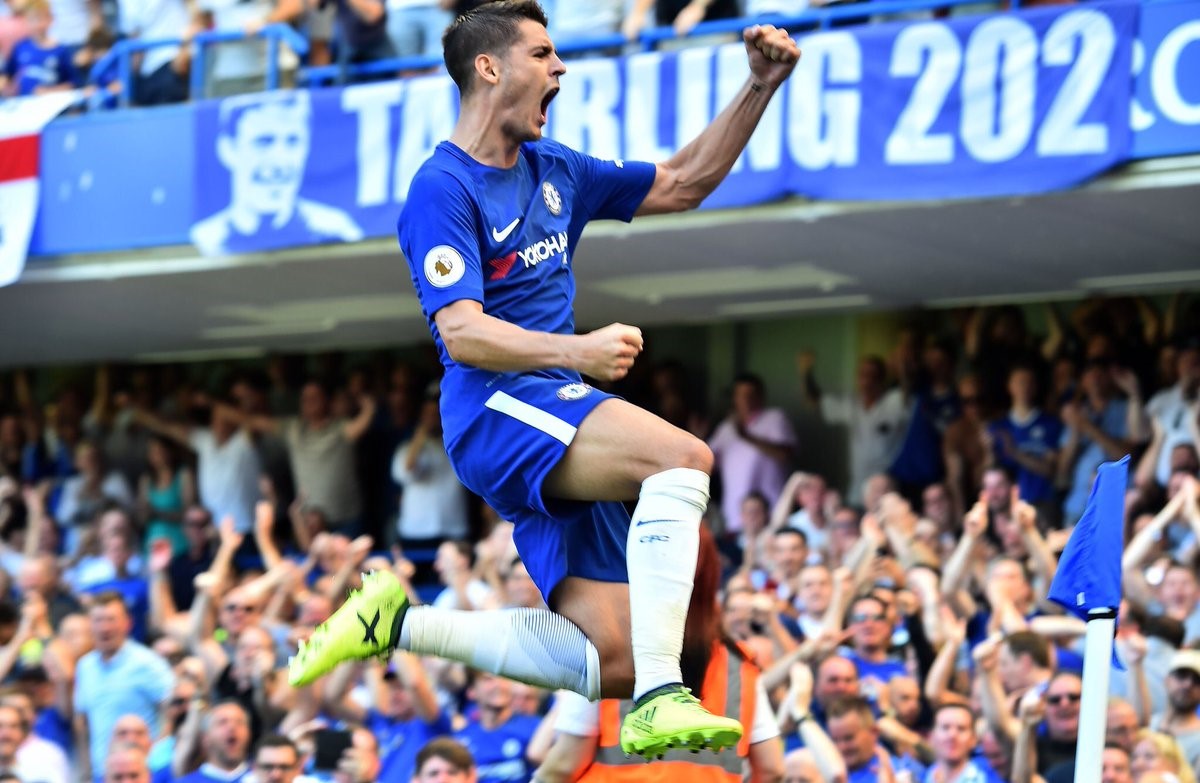 Key players in the opposition to watch out for:

1. Romelu Lukaku: He has scored 7 and assisted 3 goals already this season and has played in all the 10 matches this season.

2. Anthony Martial: Martial coming in at 60 has been a huge success for Manchester United this season. Azpilicueta will have tough night keeping him and Rashford quite.

3. David de Gea: He’s just conceded in 2 of the 10 matches played in the premier league. By keeping 8 clean sheets out of 10, he just lets in 0.4 goals a match. Scoring past him is a definite test for Chelsea.

Even though Chelsea had a very poor game against Roma, I still think Chelsea will be on top of United in tomorrow’s game. As said earlier, If Chelsea fail to win tomorrow having already lost three games this season and a fourth defeat would be a hammer blow in retaining the title. But a win would automatically increase our morale to the future challenges after the international break.

Hope you people liked this. I’ll catch you up again after the game with review. Please be in touch with Chelsea India for further more on Chelsea.